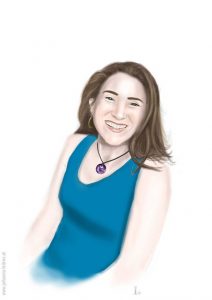 In 2018 Julia received a doctorate degree with distinction in Romance Studies, primarily in Cultural Studies with an interdisciplinary approach also taking into account American/Canadian Studies.

In this transnational field, her research focused on Lesbian Studies in online media, investigating female identities in Lesbian Web Series.

In her doctoral thesis she analyzed the representation and construction of lesbian identities as well as the interaction between filmmakers and their audiences in the context of a participatory culture within the emerging field of online web series, mainly in Romance‑speaking Europe and the Americas.

For a more personal portrait of Julia (in German) click here.

The main focus of the thesis Female Identities in Lesbian Web Series – An Online Medium for Transnational Community Building in Anglo-, Hispano-, and Francophone Contexts lies on the investigation of the representation of lesbian women in US-American, Canadian, and Spanish web series from 2007 and onward and their reciprocal effects regarding identity construction of their transnational (lesbian) audience.

The aim of the research project was to elaborate a first definition of the new format ‘Lesbian Web Series’, a recent phenomenon, and resolve to what extent the representation of lesbian women in media has changed over recent decades, not least because of the new medium itself. For this purpose, sociohistorical and cultural data has been collected in the US, Canada, and Spain, using participant and non-participatory observation on location in the field (at LGBT events and in archives, etc.), and relating these results with a character analysis of the lesbian protagonists taken from the corpus (primarily on YouTube).

In summary, for the first time web series facilitate consequent female-centred storylines in this format due to their formal and creative freedom. Furthermore, the high level of interaction with the audience generates temporal communities and ensures audience migration regardless of media-related, linguistic or cultural barriers on a transnational scale.

In 2010 Julia obtained a master’s degree in Spanish and French at the University of Graz in Austria where she also studied and tutored Austrian Sign Language at the Department for Translation Studies. She wrote her master’s thesis on Spanish Deaf Literature and Deaf Culture, thereby combining her in-depth knowledge of both fields. Following a year of teaching languages at an Austrian high school, she returned to academia to teach research methods through New Media and Franco-Canadian Culture at the Department for Romance Studies.